Nice to Meat You: Sweet Retreat 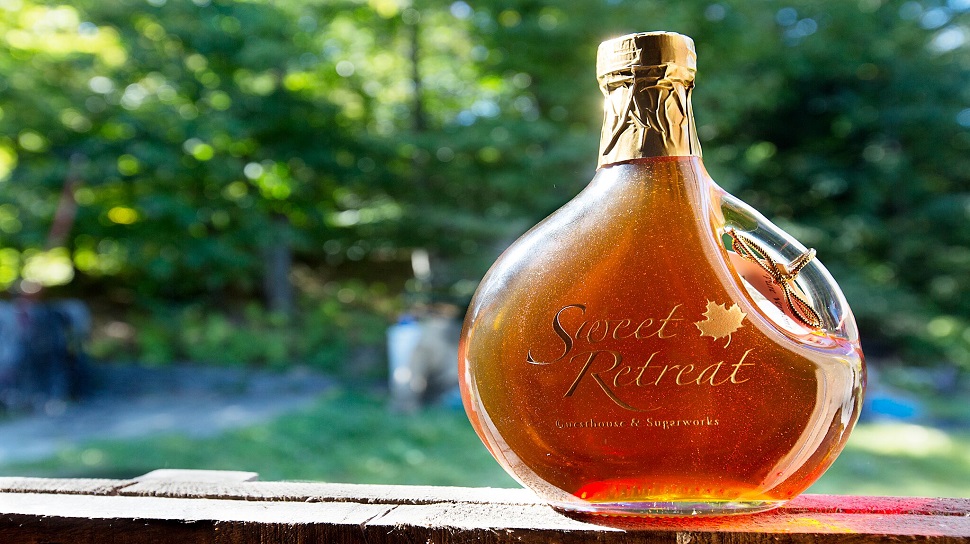 Sugar maker Ray Morvan pulls open a valve and deep golden brown maple syrup arcs into a stainless-steel bucket. Then he opens a second valve. He explains, “the syrup is just at the right temperature and rising quickly.  I have to pour a lot off, right now, before it starts to burn.” As a maple syrup lover, these twin streams of hot delight beg me to bring platters of pancakes to soak up that Vermont maple syrup. But none are in sight. 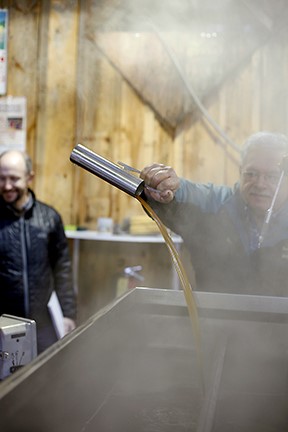 A quarter-full dixie cup of maple syrup helps me manage this torture.  Not a bad way to spend a Tuesday morning.

A half mile up a rough and snow-covered skidder road, and off of a not-for-city cars kind of dirt road, sits the Sweet Retreat sugar house. It’s the size of a small barn, with weathered rough sawn boards and post and beam structure. It sports some unusual creature comforts — an attached cabin with a small kitchen, recliners and TV – all of which is purely functional (or so he says). The extra space allows Ray, his family, or his small team (of 1) to monitor the syrup at all times when it is boiling, in a bit of extra comfort. 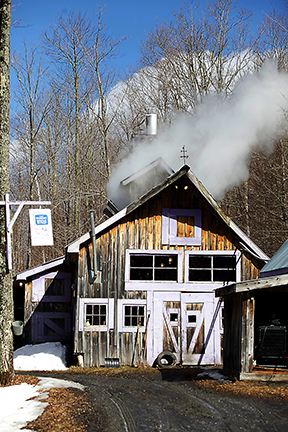 Ray doesn’t trust the new technology that could allow him to sit in his home a mile away and make maple syrup essentially by remote control. “In certain situations, those systems will allow the syrup to start to burn, and I won’t have that,” he says, “you can still sell it, but I only sell perfect syrup.” The stack of blue ribbons from the years Ray used to enter competitions, and his stories of impressing the state maple inspector, attest to the outcome from his approach. Our taste tests at the Vermont Smoke & Cure smokehouse an hour away in Hinesburg agree. 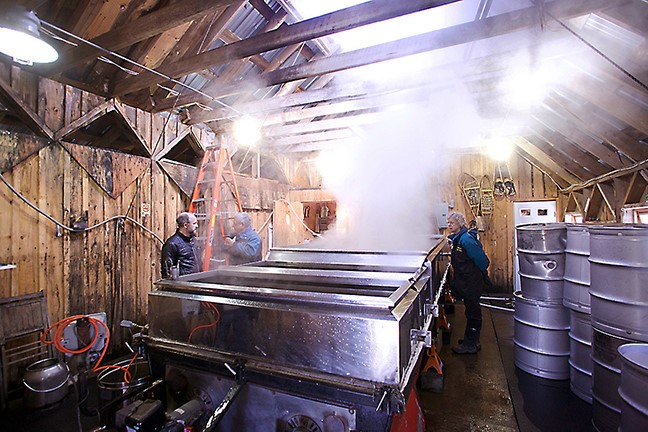 Ray also won’t install a “covered arch,” which helps the syrup boil more efficiently, “I prefer to keep a close eye on the boiling,” says Ray. Don’t take Ray as a Luddite syrup maker though. He proudly shows off his modern reverse osmosis system to concentrate the maple sap from 2% to 12% sugar before he starts to boil it, dramatically reducing the energy and time required to convert the typical 43 gallons of maple sap into one gallon of maple syrup. He just won’t do anything that puts the quality of his syrup at risk and tastes every pour of hot syrup from the boiling pan. 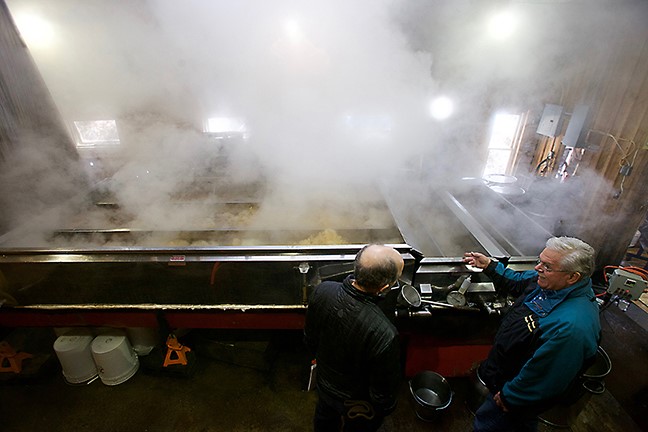 After spending a couple of hours in the sugarhouse with Ray and his wife Hannah, and knowing him for over a decade, it’s evident that Ray’s maple syrup is as much an expression of him as a person as it is this business. And it seems like good business: Sweet Retreat sells his hundreds of gallons of table grade syrup exclusively as corporate gifts in custom-etched glass bottles; he invented a dramatically more efficient method for etching the bottles to make this economical.  He happily explains the operation, “we put out 5,000 taps each year on our 400 acres; we could put out many more, but we only tap for what we sell ourselves. I built this sugarhouse with my sons with wood we cut and milled on-site.”

“It’s great to know we can sell all of my cooking grade syrup to Smoke & Cure each year; it has been at least twelve years.” Until Vermont Smoke & Cure graduated to buying stainless 40-gallon barrels of maple syrup from Ray, he supplied us syrup packed in beer kegs he’d fitted with a simple valve. We repeatedly returned them to be washed and refilled. Like any good farmer, Ray has invented more than a few solutions to the everyday challenges on the farm.

I love seeing these on-farm simple and cheap innovations and remember when I farmed for seven years, how much I enjoyed being able to solve problems with a cutting torch and a welder. Each solution was simple, strong, permanent. Until I thought of a way to improve it. 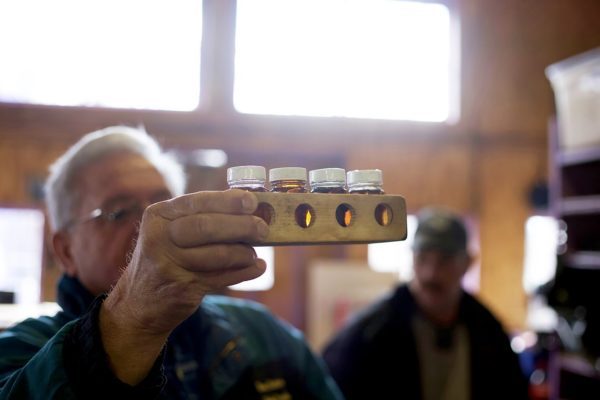 Ray says, “I love your bacon that you put our syrup into the brine. But I like the maple brined ham even better.  You just can’t get hams like this anywhere else. We send it out as gifts to friends.”

And we, at Vermont Smoke & Cure, love being a reliable, long-term customer for Vermont farmers whenever we can. Ray and I have operated on a handshake agreement for over a decade. Vermont Smoke & Cure hasn’t strayed to other suppliers; Sweet Retreat has always delivered top-quality syrup when we need it. What a great way to do business. 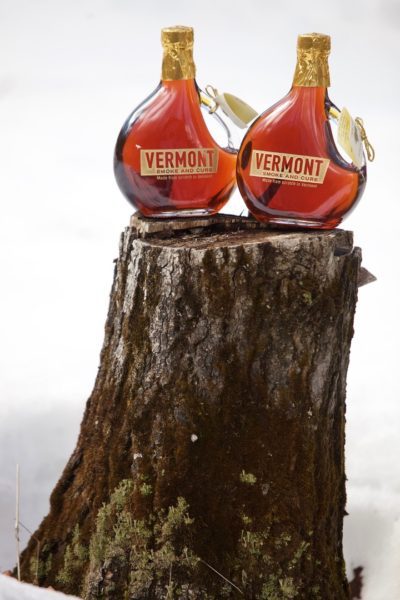 At 74 years young, Ray continues to make a lot happen. The husband and wife team run the Bed & Breakfast on the farm, cut and sell hundreds of cords of firewood, as well as sell stone for houses, walls, patios, walkways, and chimneys. Ray also raises and trains oxen and steers on the farm. Ray only seems to gain more energy though, “I mountain bike on trails here through the woods, and Hannah and I snowshoe and hike all over the property.”